Your favorite breakfast dish has more than just one name. That’s right, pancakes are also known as flapjacks, hotcakes, or griddlecakes. If they all mean the same thing, why do all these names exist? Who wins in the battle of hotcake vs pancake?

While it seems unnecessary for pancakes to have different aliases, there are slight differences between each version of the name. However, they still fall under the broader pancake family. Curious about the key differences between a pancake vs flapjack vs hotcake vs griddle cake? Keep reading to find out.

Normally a sweet dish, pancakes are made from a batter containing eggs, flour, milk, sugar, baking powder, or other leavening agents. You typically pour the batter onto a nonstick, cast iron pan, or griddle, and allow it to take the shape of a round flat cake.

You start by cooking pancakes on one side until they are ready to flip and are golden brown and they’re usually eaten with butter and sweet syrup, most commonly maple syrup. People also consume pancakes with fruit, or even as a savory dish sometimes. 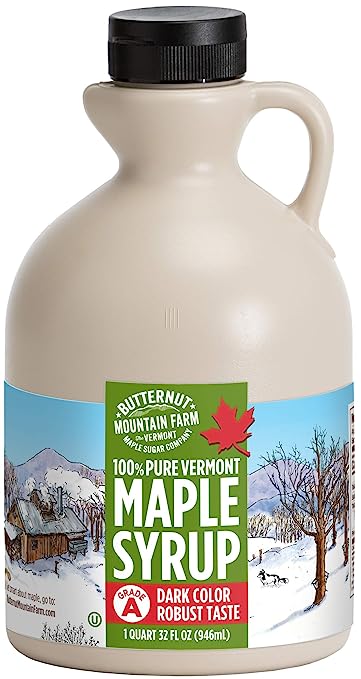 The American pancake is the most common version in the US (duh!). There are different versions of pancakes throughout the world though. Some of these are savory, while others are sweet. Furthermore, they are also made using slightly different ingredients.

In the UK, for example, pancakes usually refer to a much thinner, crepe-like dish that may or may not be stuffed with all types of sweet or savory mix-ins.

Are pancakes called hotcakes? In the US, hotcakes and pancakes mean essentially the same thing. There is absolutely no difference between the two in ingredients, cooking style, or texture. McDonald’s is probably the most well-known establishment that serves pancakes but refers to them only as hotcakes.

Fun fact, in Europe, hotcakes generally refer to a pancake that is thicker than an American pancake. There, you would cook the pancake on a griddle and brown it for a longer period of time. 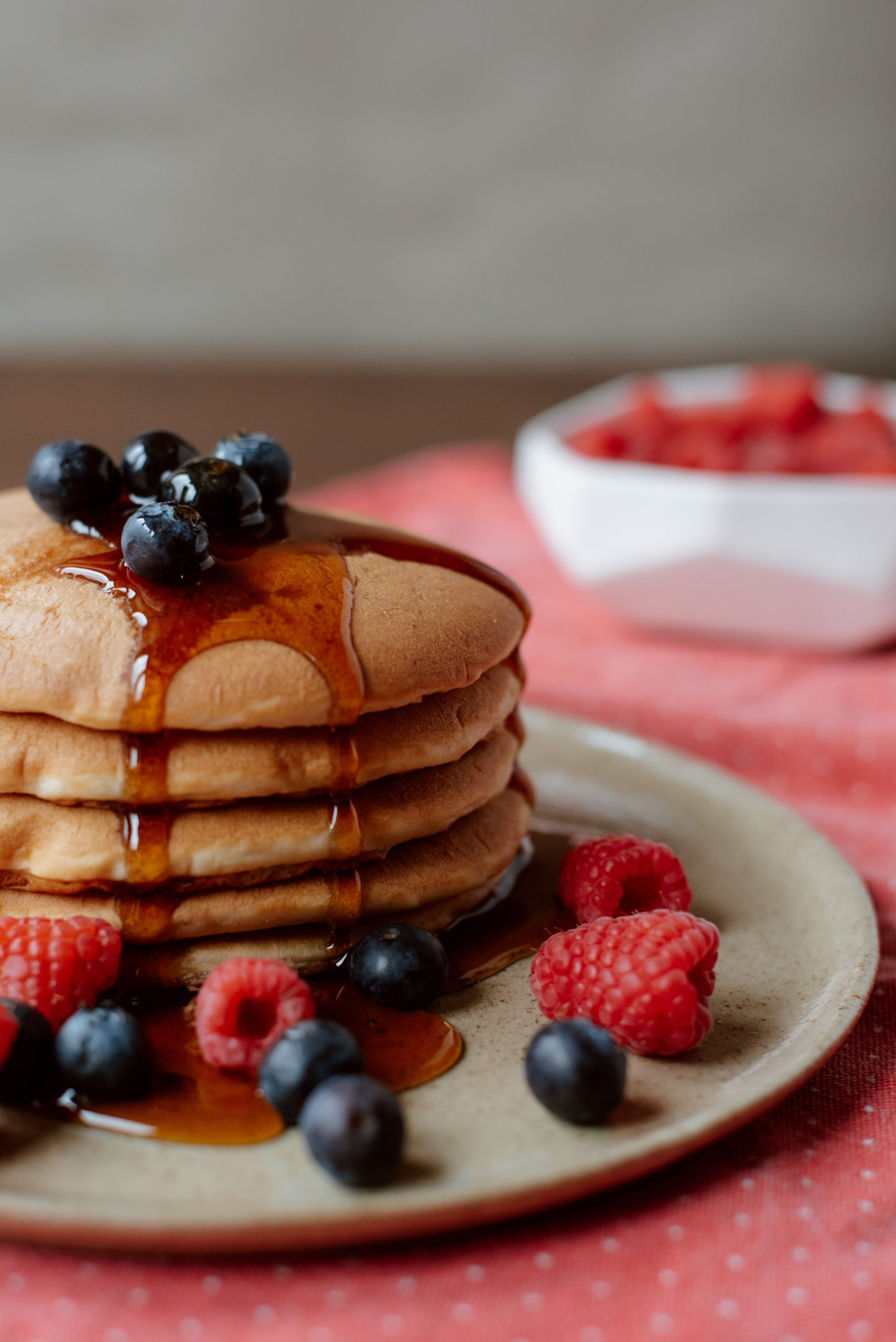 Griddlecake vs Pancake: What’s the Difference?

The terms griddlecake and pancake are interchangeable in the US as well.

Europe generally has other interpretations for the word griddlecake. Even though the name suggests that they cook on a griddle, these are usually thicker, fluffier pancakes cooked in a pan.

What’s the Difference Between Pancakes, Flapjacks, and Hotcakes?

If you’re familiar with American pancakes, then there’s probably no difference between pancakes, flapjacks, or hotcakes for you. These three all refer to the same dish in the US – they’re fluffy, delicious pancakes with a topping of butter and syrup. Yum!

However, in other parts of the world, particularly in Europe and some parts of Asia, flapjacks refer to pancakes that have been prepared using rolled oats. The flapjack batter may still contain flour and other traditional pancake ingredients but has added oats. Moreover, in Britain, flapjacks are often baked and not cooked in a pan.

Is it still confusing to learn the differences between hotcakes, pancakes, griddlecakes, and flapjacks? We’ve put together a simple comparison table below to help you once and for all to know the very small but some would say important, differences between these delicious dishes. 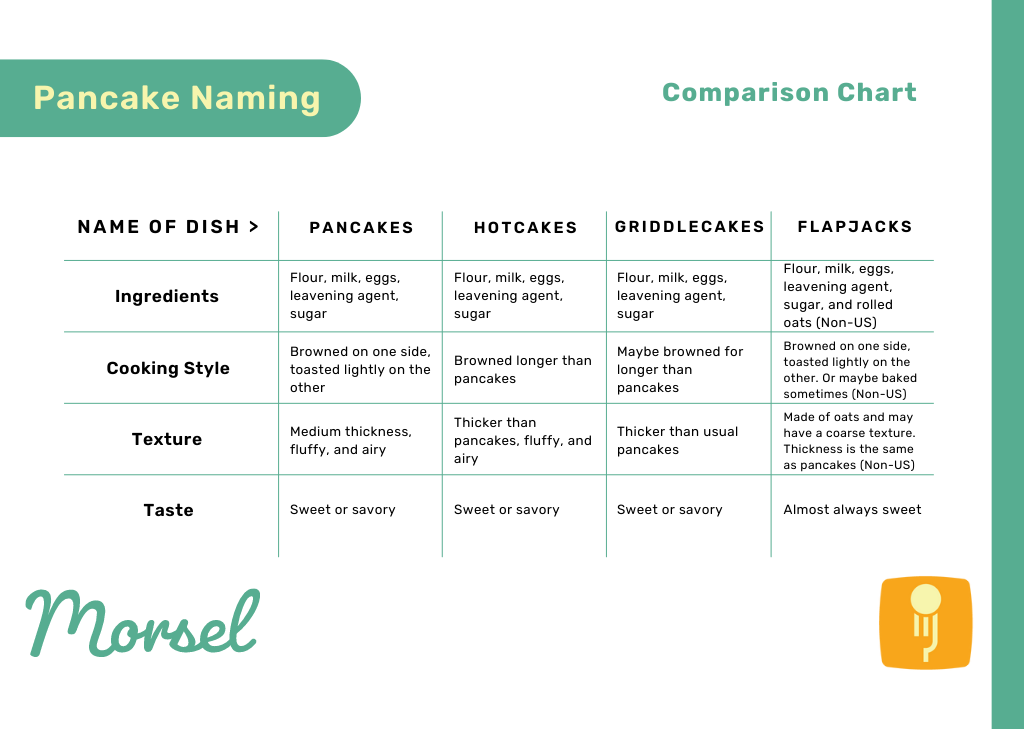 To summarize, pancakes, hotcakes, griddlecakes, and flapjacks are all names for the same dish in America. In other parts of the world, however, each name has varying ingredients, cooking styles, flavors, and textures as you see above.

What Are the Different Names for Pancakes?

Aside from flapjacks, griddlecakes, and hotcakes, pancakes can take on several other names with varying styles of cooking. Here are some of the most common names and types of pancakes around the world.

There are several other pancake varieties prevalent worldwide. Each culture and country has its version, however, in the US American-style pancakes are the most popularly known and loved.

Are Pancakes, Flapjacks, or Griddlecakes Gluten-Free?

Pancakes, flapjacks, and griddlecakes are not gluten-free if made from all-purpose flour, however, you can prepare your gluten-free version by using an alternate flour like almond flour.

Also, if you want vegan pancakes, you can skip out on the eggs and add banana and almond milk as a replacement. Coconut milk is also a great alternative.

Now that you know the difference between a hotcake vs. pancake, as well as flapjacks and griddle cakes, you can decide which one of these is the most delicious to you. The next time you decide to have your choice of which pancake you’ll cook, make sure to use Morsel to help you save the best recipes for each version. Add a little variety to your breakfast routine by cooking crepes, UK flapjacks, or Blinis, and see which one you like best!

Aida Solomon is a digital marketing specialist who’s passionate about bringing her creative ideas to life. As an avid homecook, Aida loves to explore the way food has the power of bridging the world together. When she’s offline, she loves to travel through new recipes, and run long distances — paying homage to her Ethiopian roots.